The company is already in Dizraptor’s portfolio since Dec 27. New offerings are possible in the future

Stripe is one of the largest providers of online payments.

Stripe has developed an ecosystem that allows businesses to process payments in a smooth and efficient way. Its comprehensive platform enables companies of all sizes to accept payments, send payouts and run their businesses online. With the help of Stripe any company can transfer money from its customers bank accounts to its own bank account, manage revenue, prevent fraud, issue virtual and physical cards, and get financing. As of Aug 2022, Stripe has issued 72 patents (CB Insights data).

The company has more than 2 million customers around the world, and more than 3 million websites use Stripe for their payment needs. Stripe states that 90% of all bank cards have been processed through the Stripe network at some point. It supports over 135 currencies.

Overview of the products:

Stripe is dual-headquartered in San Francisco, California, US and Dublin, Ireland. As a global company, it has offices in 10 countries.

The company was founded in 2010 by two brothers with Irish background, John and Patrick Collison. In their early 20s, John and Patrick founded their first company called Auctomatic, a management system developer for auction sites that built tools for the eBay platform in particular. They successfully sold it to Live Current Media for $5M in 2008.

Patrick is a technical prodigy, having won numerous prestigious awards, including Ireland’s 41st Young Scientist and Technology Exhibition in 2005 for his work on the programming language Lisp. It is a national science competition which boasts hundreds of submissions each year from the country’s brightest young scientists. Patrick studied at MIT before launching Auctomatic, and was also director of engineering at Live Current Media. John enrolled at Harvard University, commencing his studies in September 2009. He is a pilot and a pianist.

Online payments market has registered substantial growth in recent years. According to a research report by Market Research Future (MRFR), the payment gateway market is poised to reach $193B by 2030, growing by 10% on an annual basis. Factors such as the increase in online transactions and online business platforms contribute to market growth. The rapid evolution of digitalization and automation in SMEs and large enterprises increase the use of online payment gateway solutions.

In January 2022, Stripe entered a strategic five-year partnership with Ford Motor Company to handle transactions for consumer vehicle orders and reservations. It has also recently partnered with Spotify to help creators monetize subscriptions, accept payments and launch recurring revenue streams. In April 2022, Twitter announced that it will partner with Stripe for piloting cryptocurrency payouts for limited users on the platform. In the same month, ION, the fintech company from the UK, announced a strategic partnership with Stripe. Both companies will work together to implement the infrastructure required for mid-market organizations to automate billing and payments, integrating CRM and accounting software while providing data analytics.

Given the rapid growth of the market along with well-established strategic long-term partnerships with corporations around the globe, Stripe is well-positioned to further capture the market share and increase its revenue.

The company has raised a total of $2.3B in funding over 8 rounds. During its latest primary round Series H in March 2021, investors valued the company at $95B. The round was led by Sequoia, Fidelity and others. 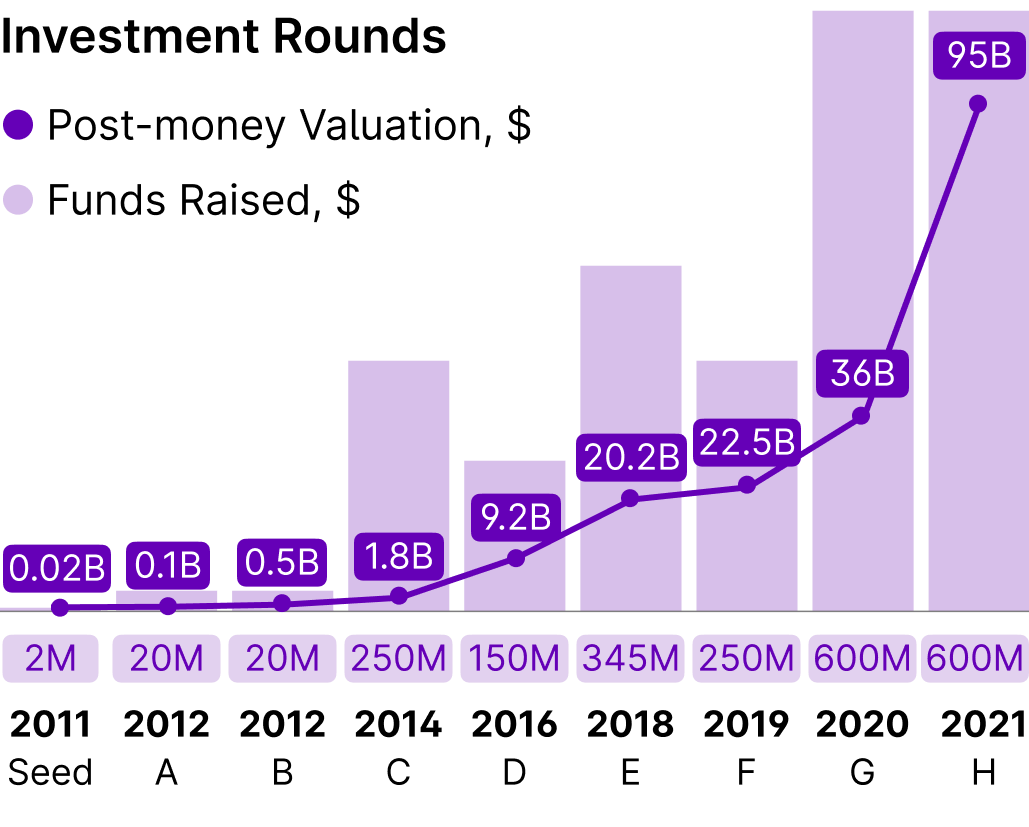 In Aug 2022 the valuation for Stripe was cut by T. Rowe Price Group by 64% due to the overall market volatility and uncertainty. Fidelity Investments cut Stripe’s valuation by 52%, Bloomberg reported. The value of Stripe’s equity represented a 40% to 50% discount to its last year’s valuation on the secondary market.

Stripe’s revenue comes from the fees it charges to its customers. The fees vary based on the value of the payments. The revenue model has been constant since the beginning. The company has different packages on the selected products. Stripe’s standard fee structure is 2.9% + 30¢ per successfully executed payment transaction. For international transactions, the company charges 1% more, which becomes 3.9%.

According to Forbes, Stripe processed $640B in payments in 2021 across 50 countries. Its gross revenue reached nearly $12B in 2021, up about 60% year over year. Net revenue, which excludes the cut Stripe passes along to partners like Visa, Mastercard, Chase and others, reached nearly $2.5B. Additionally, Stripe finished the year with hundreds of millions in profit on an EBITDA basis, which is an important factor for the current market environment.

Taking into account product mix, margins and growth rates, the closest public competitor of Stripe is Adyen, a Dutch omnichannel payment processing company. In H1 2022 Adyen grew its gross revenue by 54% YoY to almost $4B, reflecting the ongoing demand for fintech solutions in the payment processing market. Adyen finished 2021 with $6B in total gross revenue, and is estimated to finish 2022 with $9B in gross revenue.

Given the historical growth rates of Stripe, its market share and transaction volume trends of public competitors, Stripe is estimated to grow its gross revenue by 30% in 2022, reaching $15.6B. Stripe is trading with a discount to its latest investment round, and given its growth trajectory, it may reach a valuation north of $100B when going public in the upcoming years.

Taking into account the significant discount to its latest investment round, the current market price of Stripe presents a compelling risk-return opportunity for investors. Adyen, in comparison, is trading at $52B valuation while:

Given these numbers, Stripe is trading with a discount not only to its latest investment round, but also related to its closest public competitor, and it may reach a valuation north of $100B when going public in the upcoming years.

Over the last 12 years, Stripe has demonstrated significant business results that translated into the company's stellar growth in valuation. And it seems it’s just starting to take off – while only a small portion of global spending activity happens online today, Stripe is hoping to help boost that number to double digits. Additionally, the flywheel effect in Stripe’s ecosystem may help the company to source new revenue streams across a broad range of financial products in the near future.

Intense competition. Stripe operates in a highly competitive industry. Similar companies include Adyen, PayPal, Shopify, Amazon Pay, Square and others. If Stripe is unable to compete successfully, it will adversely affect the company's results and future prospects.

Stripe offers a complicated compliance and setup. A company needs to perform a series of KYC and coding tasks to integrate Stripe. While this isn’t a problem for companies with technical resources, it may not be a preferable feature for small and midsize businesses.

Fee structure can get expensive. Many of Stripe’s advanced features add costs on a per-transaction basis. Combined with the flat-rate pricing, that can make scaling up with Stripe quite expensive.

The Collison Brothers Built Stripe Into A $95 Billion Unicorn With Eye-Popping Financials. Inside Their Plan To Stay On Top, Forbes, May 2022